There he is…. handsome Jack.

I tell you the truth, no matter how many times I find this spring ephemeral wildflower, it always stops me in my tracks and takes my breath away. Jack in the pulpit (Arisaema triphyllum) seems like an exotic species in my mundane Midwest landscape. So unique….so unlike any other plant.

Short to the ground, it takes patience and being in the moment to notice this creature among the sea of green on the forest floor. If you’re walking while dreading bills, or life’s challenges, you risk missing it! You must calm your mind, go slow, and be in the present moment, enjoying every inch of blessings around you.

It is something as small as Jack, that can pick up my spirits and transform my day. I am so grateful for all God’s creation.

Spring ephemeral (lasing a short time) wildflowers are making their appearance on the forest floor as we speak! But you must seek them out now, for soon the leaves on the trees will be fully developed and the shade wont support them.

This video shows how to paint a prairie trillium. I could not include a voice over step by step because my software was glitchy. So, this video is just a visual step by step.

Enjoy the sights and sounds of spring! 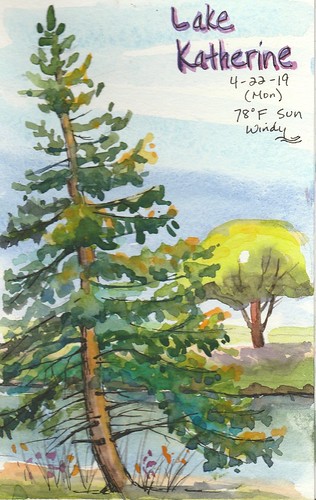 Even the pine reaches for the light.

When I go to a location with sketching supplies in hand, how do I decide on a subject to sketch? I begin to walk…looking for something to speak to me. Something in nature has to reach out, it has to say something without saying anything at all. It could be a unique feature on an ordinary object. It could be a look, a moment, or a feeling. I could relate to it or I could be in awe of it.

This pine at Lake Katherine spoke to me without words. It said, “I’m doing all I can in my circumstance, then I let go.”

Do you feel this way? Can you come to this conclusion?

Sometimes when the world seems dark and overwhelming, reaching for the light then letting go is all we can do.

Do not fret or have any anxiety about anything, but in every circumstance and in everything, by prayer and petition, with thanksgiving, continue to make your wants known to God. And God’s peace which transcends all understanding shall garrison and mount guard over your hearts and minds in Christ Jesus.
Philippians 4:6-7

May you find peace and comfort in the light.
Amen 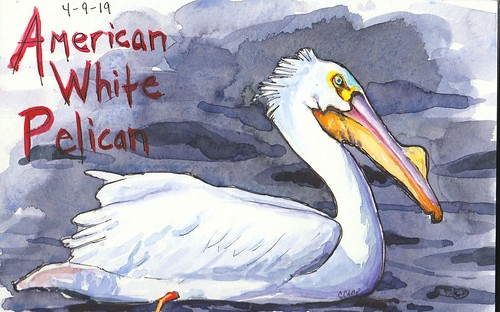 Was I seeing correctly? Was that a pelican on the water?

A few days ago, on a spur, I drove out to Rock Run Rookery by myself. I’ve been there once before with ornithologists on a bird outing. It’s fun to listen to bird enthusiasts, especially knowledgeable ones who can identify birds by their call alone and not by sight. You want to be with one when trying to identify birds.

Anyway, on to my visit… I’m not a bird expert, however I was seeing a pelican. In the Chicago area. Hmmm…

Sure enough after some research I learned all about the migrating American white pelican (Pelecanus erythrorhynchos). Unlike its cousin the brown pelican who is a coastal bird, the American white pelican migrates over land on its way to the Dakotas or Canada from Mexico. He is a very large bird (30 pounds) and his bill can hold 3 gallons of water. As he feeds, he skims the water collecting fish. He does not dive under water like his cousin, the brown pelican. And that hump on its bill? That means its breeding season. After breeding season is over, it will lose that growth.

To look at him, you would assume he was completely white, but in flight he reveals his stunning black flight feathers.

When I saw this creature, we locked eyes. There was a moment. As a faith based person, it is amazing to connect with wildlife and have a common bond with the One who created us. I can’t exactly put that into words, but some of you know what I’m talking about. Maybe that’s why nature is so important to me. It’s not just random cells on automatic pilot…it’s so much deeper than that. 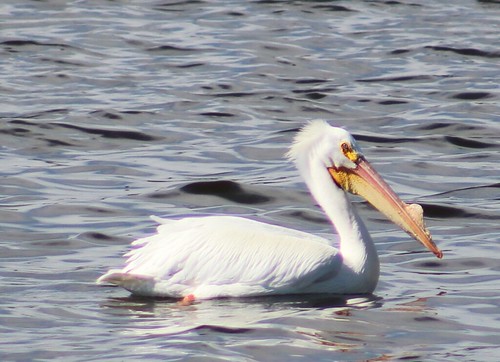 After my pelican encounter, I walked to the stream at the beginning of the park. Under the comfortable picnic shelter, I sketched the waters, oh so green. 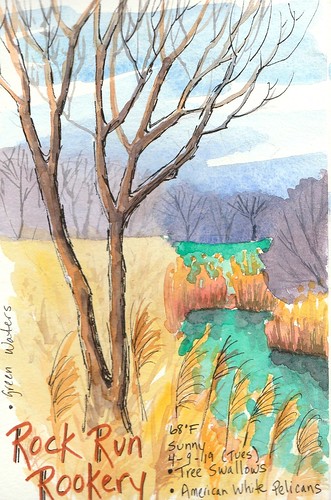 I don’t know why the water was vibrant green, turquoise like, but that is no exaggeration. This section of the park was quiet, beautiful, and last year’s dried grasses made a marvelous tone.

If you are ever in the Joliet area, I would advise a visit to Rock Run Rookery. 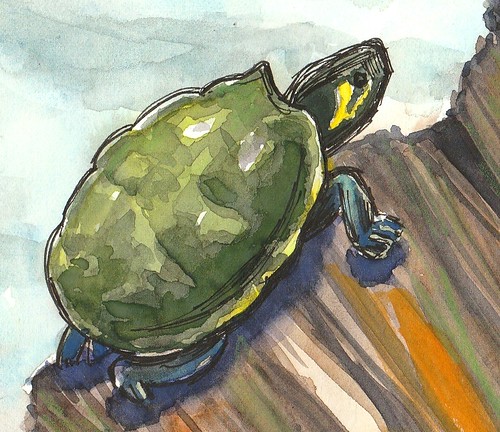 Ahhhh…To live like this one…basking in the sun without mind of time. There’s no room for a watch on his stubby little leg. He sees no second hand, therefore ticking cannot be heard in his ears. It is such a healthy state to be in, without regard to time. I feel most whole when I am in this state, unimpaired and able to connect with nature.

This turtle looks like a yellow-bellied slider (Trachemys scripta scripta), but they are not from my area. It is possible someone released it. Or it is possible it is a painted turtle (Chrysemys picta) with a strange yellow formation on the side of its head.

Whichever type of turtle it is, I can learn from it: To take life slow and be in the moment. 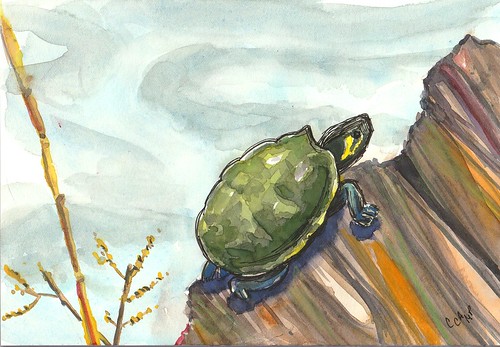 I simplified this watercolor sketch by removing the complexity of the drift wood. You can do that when you paint because you make the rules. 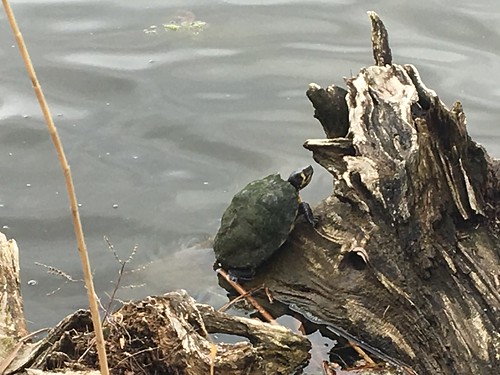 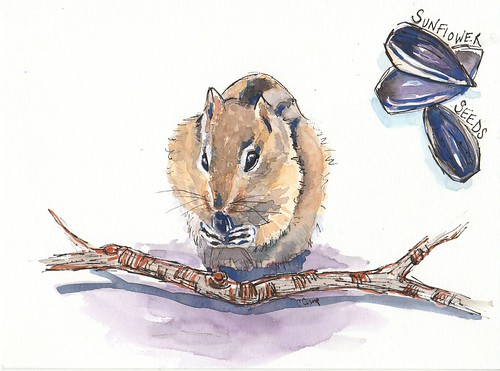 The rain hits my window and I give it my full attention.
It does not come in a rude, forceful manor,
Rather humbly, as soft as it can.
Like a missionary quietly in the background,
Who doesn’t want credit,
Who doesn’t want accolades.

I notice you, rain.
I know the good works that you are doing.

Now, to my chipmunk friend (Tamias striatus)…
The one stealing sunflower seeds out of my bird feeder…
I see you too.
I hope the seeds fill your belly.

May the seeds be your food and the rain, your drink.
Be well. 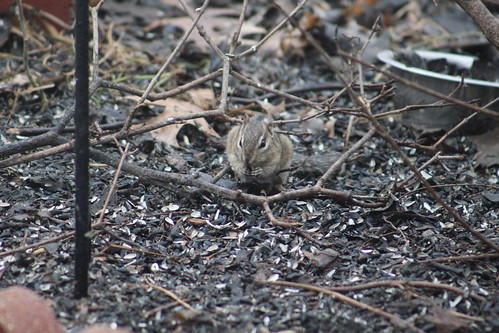 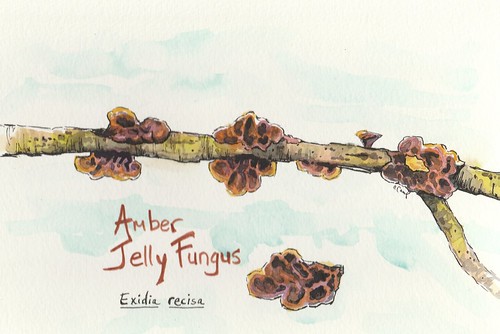 My hikes never cease to provide surprises, even some half buried in the snow. On this cold winter day I found amber jelly rolls. Amber jelly roll (Exidia recisa), is a fungus that grows on downed twigs and limbs. Beautiful blobs of jelly they are, chilling on frozen branches on the ground.

An interesting fact about these jelly rolls: they can dehydrate and re-hydrate. The dehydrated jelly fungi looks dark black and flat. As soon as the atmosphere provides moisture they will plump back up. 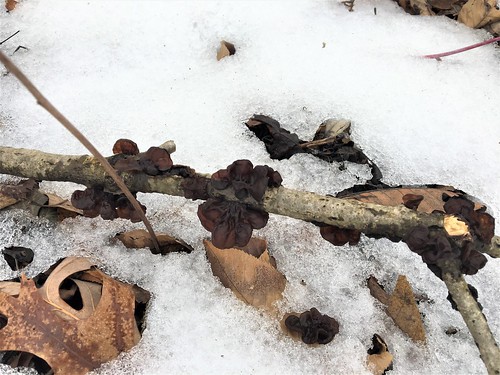 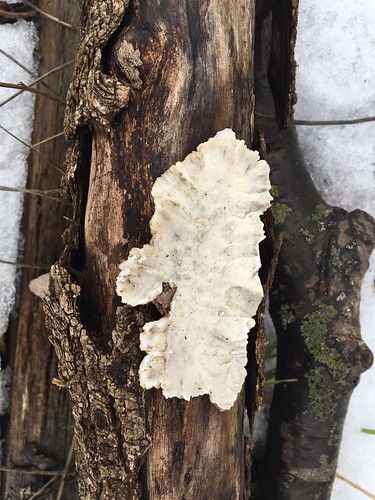 Here is another fungus I found on my hike. I do not know the species. It is flat with slightly ruffled edges. Perhaps it’s a type of parchment fungus? 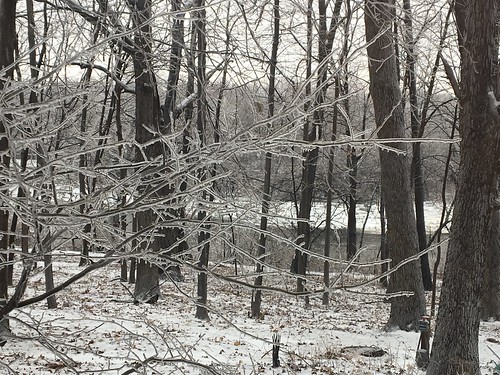 Sometimes, winter takes my breath away. At this moment in time, ice encapsulated every twig. Winter never looked so elegant. It’s easy to love spring. It’s easy to love summer. Their flashy blooms of all things petaled, makes it so. But winter? Her allure is quiet, in the most refined way. 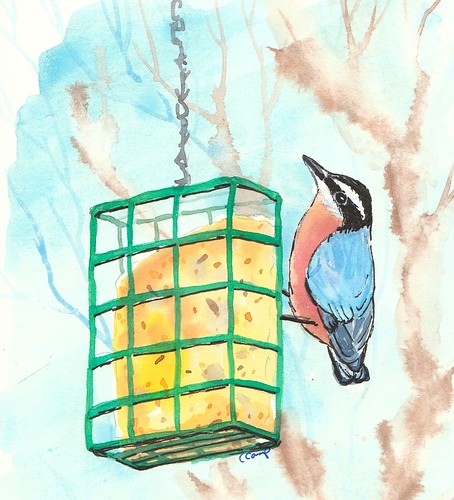 A Red-breasted nuthatch (Sitta canadensis) came by to say, “Hello.” In return I fed him suet. I quietly sat contemplating his woes. They are many, for while he ate his breakfast it was a mere 8°F.

He ate alone and used the pine tree in my backyard for cover several times: grabbing suet, flying to the pine, returning to grab more, then taking cover in the pine, repeat. While he was at the suet feeder, he paused to look around. He knows he’s prey. He needs to be careful. Not scanning your surroundings can be costly.

While he braves the predators, he must brave this cold too. Some strategies this cleaver little nuthatch has is to use his tiny little muscles to puff up feathers, creating a warm pocket of air from the warmth of his body which can be 102-107°F (Lawlor 1998). Another strategy is shivering, but this comes at an enormous energy cost. The high fat content in the suet can provide such energy but only for so long. Another reserve he has is to drop his body temperature way down when he is inactive. This allows him to conserve his energy.

In all his struggles he is provided for, in this moment. So am I, I must remember. And very blessed to have this visit with him. 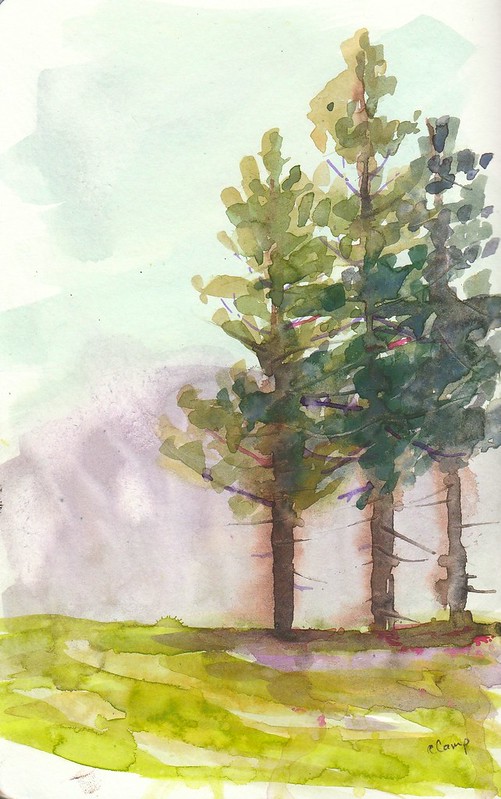 Are you one to despair on a gloomy day? Does the weather hold you as a prisoner in your own home? Please, let me charm you on the joys of a rainy day. Yes, joy.

The forest is alive, even without leaves on the trees, with the deafening sound of pelting rain. It vibrates and echos all around me. The icy rain pelts the frozen ground but is warm enough to melt the last remaining snow.

I am alone with the wet trees. I feel like a child again. Is it a good idea to be walking in the cold rain after recently recovering from a cold? Probably not, but that’s what children do… throw caution to the wind in favor of fun. And I’m having it. I feel alive. As alive as this forest.

I play in the rain and I paint with the rain. The above watercolor painting was done with the rain. After my walk, half soaked, for my raincoat did not cover my legs, I sat in my car and painted one layer, then held the painting outside the window…. let dry, painted another layer, then held the painting outside the window, painted the final layer, and again asked the rain for help. The rain obliged and created lovely drips and blooms. I am so grateful.

Let the rain entertain you and play a soothing sound…

Then look around and see every limb dressed with strings of diamond rain drops. Take your hood off for a second and feel a cold wet kiss on your cheeks. Feel alive.

Happy New Year to all my art and nature friends out there! May 2019 bring you peace, creativity, and definitely moments to make you feel alive again. GO get them! 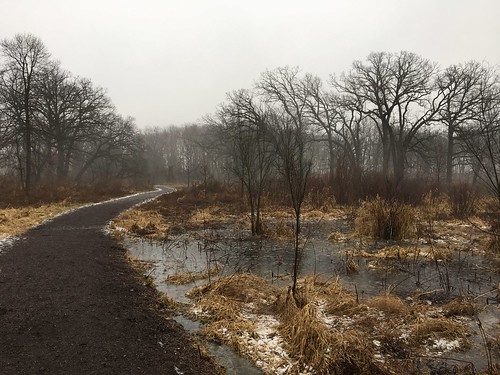 The Allure of Winter Weeds

Winter isn’t deprived of beauty.
Yes, color is a little more drab but really, beauty is still all around us… you must look a little closer. Where winter is weak in color, it makes up for it in texture. There is texture to be seen in every inch of every step you take in the woods. Winter weeds can be found on the edge of the trial, in a prairie, or even along side of the road.

Some of these attractive weeds still hold fruits and seeds at this very moment in the depths of winter. They wait. They wait for winter to loosen its bite… for seed to have hope.

Dried arrangements are beautiful and no watering required!

If we look close, we can see that the Queen Anne’s Lace has some fruits on the inside of the umbels. Up close, the fruits look like Venus fly trap plants. Fascinating!

And if we look closely at the foxtail grass, they still have a few seeds attached.

Winter can still be an exciting season for nature/art adventures. Try to find the textures all around you and see what you come up with. And don’t forget to record what you find in your journals.

© 2008-2020 Let's Paint Nature Copyright Info: All images, paintings, and text are of copyright material. No duplicating permitted without permission.